In every case to date, restriction of the right to keep and bear arms has resulted in a rapid rise of violent crime. The criminals become so emboldened that they begin assaulting people in their homes, knowing that the disarmed Citizens do not have guns for self-defense.

A well regulated Militia and the right of the people to keep and bear Arms, shall not be infringed.

That's all I have to say 'bout that.

CLICK THE IMAGE BELOW TO WATCH THE VIDEO REPORT. 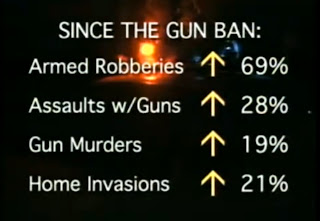