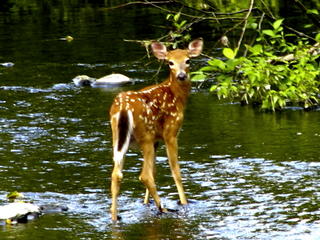 I was out doing an estimate yesterday, and decided to take advantage of the opportunity by enjoying a motorcycle ride and bringing along a camera. The motorcycle is a BMW K1200S, and the camera is Canon's new point-and-shoot, the S2 IS. After visiting the prospective jobsite, I proceded to take some semi-random turns down unexplored side roads. I took some nice photos along the way and eventually turned around to head in the general direction of home and dinner. As I was crossing a bridge over a shallow creek, I thought I saw out of the corner of my eye, a fawn standing in mid-stream about 120 yards upstream. I elected to investigate, and turned around. I coasted to a stop on the bridge next to the guard rail on the wrong side of the road, and killed the engine. With as little commotion as possible, I pulled the camera out of the tank bag and took this photo, twisting uncomfortably to my left and trying to hold steady while straddling the motorcycle, and with my riding bloves and helmet still on. I then shot a nice video clip with the same camera. (It has a 12x optical zoom and image stabilization.) In a few seconds, the deer moved on. The still shot makes a nice desktop pic on my PowerBook G4. Hope y'all enjoy it too. What are the odds of getting a shot like that? Surely God is gracious.
Posted by Craig Lowery at 8/10/2005 04:08:00 PM