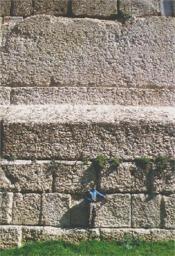 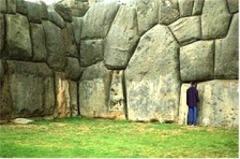 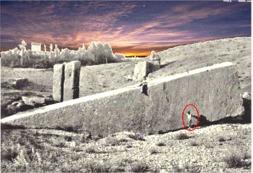 If the order of these pics gets screwed up, just click the link at the bottom of this post for clarification.

The middle picture is from Sacsayhuaman, probably an ancient stone fortress in excess of 2000 years old. Some of these stones are 10 feet high or more. Notice their irregular forms. They have been fitted together in an extremely precise manner which we would be hard pressed to duplicate with modern technology; much less the primitive technology supposedly available.

Top & bottom pics: The Baalbek Stones. This column was hewn as one solid piece and weighs 1200 tons. It's two cousins are in place in the base of the "Temple of Jupiter" and weigh in at over 1000 tons.

"The temple is one of the largest stone structures in the world. Some 26 feet above the structure's base are found three of the largest stones ever employed by man.
Each of these stones measures 10 feet thick, 13 feet high, and is over 60 feet long. Knowing the density of limestone permits weight estimates of over 1.2 million pounds. Some people with impressive engineering skills cut, dressed, and moved these immense stone blocks from a quarry 3/4 of a mile away.
A walk to this quarry introduces the observer to the Monolith, an even larger block of limestone: 13 feet, 5 inches; 15 feet, 6 inches; and 69 feet, 11 inches. The Monolith weighs in at over 2,000,000 pounds. In comparison, the largest stones used in the Great Pyramid tip the scales at only 400,000 pounds..."

Notice the man perched on the column and another standing at the base. Forget the ancient airplanes, the ancient helicopters, and the world maps... this alone should set the standard, straightline, primitive man-to-advanced man, and then to civilization, "scientific" dogma on its ear.

There is ONE theory that could explain numerous "anomalies" such as the size of the dinosaurs and the weight of these stones. Before the opening of the windows of heaven recorded in Genesis, the close proximity of Jupiter and Saturn could have exerted an "attenuation of gravity" effect on the order of 8:1. The tidal pull of these bodies would not pose a serious problem with regard to water levels, since the Earth was mostly land mass, not oceans, before the Great Flood. I believe the structural integrity problems posed by the shape and size of the largest dinosaurs can be explained in no other way. Yeah, I know it sounds wierd, but there appears to be no other explanation. According to the laws of physics and our present gravity level, these dinosaurs such as allosaurus COULD NOT HAVE EXISTED.

There is no way that this stone can be explained by the science and history they teach us in school. No technology existing today could move this stone much less transport it from where it was quarried, nor lift it upon its 23 foot foundation. (Actually, it appears moving such a monolith is on the edge but within current technology. Benjamin K., a Christian engineer informs us that Mammoet, and another company, Lampson Cranes... & perhaps a few others have machines that could do the job.)

The pre-existing stone foundation upon which the Romans built their temple at the site is 1/2 mile long on one side. No one knows who built it. There are no historical records although the local folks think it is a Pre-flood city originally built by Cain... after his banishment.

Baalbek is on my top 10 places to see before i die.

The monolit in Baalbek quarry weights about 1,200 tones, but it could not be moved from its place.

A Saturn 5 rocket weights 3,000 tonnes, and it actually can fly, much more than the height of those blocks.

The vehicule that moves the saturn V, weights 2,500 tonnes. So in total the vehicle moves almost the equivalent of four times the weight of those blocks.

And finnaly the Biggest object moved by man it the Stafjord Platform in the north sea. It was built near land and moved to its palce. it weights 900,000 tones.

ANyway.. the temples (and the stone blocks) in Heliopolis (Baalbek is the modern name) are impressive by any standard.

The oil drilling platform was floated into place, so doesn't really offer a valid comparison to a dead lift of a 1200 ton stone monolith on dry land.