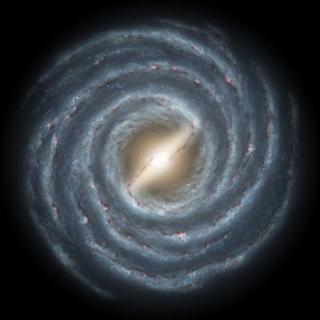 The following is exerpted from a site I found in a search for info on "Noah's Flood". It contains some pretty interesting stuff. Better put on yer tin foil hat for this one, else your mind may get permanently bent.


"Our own Milky Way Galaxy is unlike any other in the Universe. A penetrating infrared census of about 30 million stars indicates that the Milky Way Galaxy is distinguished by a very large central bar some 27,000 light-years long. It is very likely that our unique appearance is due to us being the epicenter of the opening of the Windows of Heaven, when all the stars were both 1.) moved away from Earth & 2.) other galaxies were moved away from our own galaxy. Verse 7:11 is the key to understanding perhaps the greatest mystery of modern astronomy. The question is, if our Sun and Moon are "brand new" (see the Genesis 1 comments) then how could the stars be very old? All the stars were made on day four, along with the Sun and the Moon, however, they are millions and sometimes billions of light-years away from us. This says that the light arriving here is from millions and billions of years ago. (Maybe... but not if God placed the stars a long distance away.)(Note from your host: Not if God created them with the APPEARANCE of age and placed them far away.) The (?... well, THIS answer, anyway) answer is reached through elimination.
Einstein's theory of relativity can be thought of in a reverse case situation, and would support that stars caught-up in a moving reference frame of space would experience time speeding-up, relative to our observations. So, the faster the space containing a star is moved, the faster the star would progress forward through time. Einstein himself originally proposed this force, calling it the Cosmological Constant, but was later talked out of it by other physicists. I think he should have stuck to his own ideas on that one.
What all of this means is that the Sun, the Moon, and the stars could have all been made on the same day (day four), but now, they are very different in age. Our Sun and Moon having only aged to approximately 6,418 years old, while the stars are now varying in age up to billions of years old, with the further away they are from us, the older they are. This brings us back to the old church view that we (the Earth) are at the center of the universe.
What other evidence supports the Bible here? First, is the Red Shift of most all stars. It indicates a "trail" of interstellar recession. Some theorize that the Red Shift is caused by remnants of the big bang, but a U.S. News & World Report article from July 20th, 1998 indicates that the chance of the Omega Value being "just right" to coalesce the stellar matter into solar systems is just one-quadrillionth of 1% (that is, one chance in 10 to the seventeenth power)! Otherwise, it would have blown off into infinity and dust, or just would have globbed-back into a ball of mass trash. So, it looks like the Red Shift is really an echo of the windows of heaven being opened at the time of Noah's flood. (Comment by your host: red shift is due to the Compton Effect, not the Doppler Effect, so things aren't as far away or as "old" as previously thought.)
Secondly, we have about 140 Globular Clusters around our own Milky Way Galaxy. These are a perfect example of the windows of heaven running on idle. With no apparent rotation, groups of stars just hang together in a ball. It seems that gravity as a whole keeps the ball together, and the windows of heaven provide an inter-spatial force to keep each star separated within the ball. The windows of heaven also eliminates another bit of bad astronomical theory; dark matter. This theory suggests that, since the big galaxies seem to have only 1/10 the required mass to be in an orbital velocity, there must be 10 times more mass out there that we just can't see (things like black holes, etc.). The good thing about the windows of heaven mechanism is that now galaxies can just happen to be rotating; they don't need to be in an orbital profile, lacking all of this "invisible" mass.
So why push the stars away at the time of the flood? According to Job 38:33, God asks Job if he does "...know the ordinances of the heavens? Can you establish their rule on the earth?". Somehow, the stars have an effect on Earth. Perhaps the radiation from so many stars so close to earth might have killed every living thing, once the magnetic shield wound down. And finally, a note about carbon dating. Fossils have been dated at ages much greater than approximately 6,418 years old, and yet the Sun, made on day four of creation, is still brand-new! How could this be? Carbon 14 is also known as Radio Carbon (which is short for Radioactive Carbon) and the way it becomes radioactive is by high energy cosmic rays hitting Carbon 12 (the normal variant of carbon). Since the pre-flood Earth had a very powerful magnetic shield which would have stopped cosmic rays, it would be very easy to see that virtually no Carbon 14 was formed before the flood. Also, since the magnetic shield gradually decreased in field strength after the flood, Carbon 14 production would have scaled-up only slowly to today's present levels. The only time things absorb Carbon 14 is while they are still alive, and then the age of the dead animal or plant is calculated based upon the half life of the decaying Carbon 14 still remaining. It is easy to see that the current "accepted" system of dating grossly over-estimates the age of fossils, when one ignores the pre-flood Earth's powerful magnetic shield. "