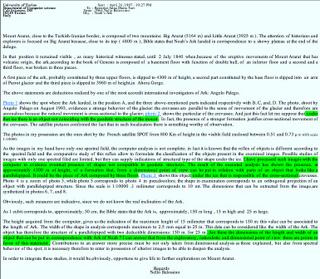 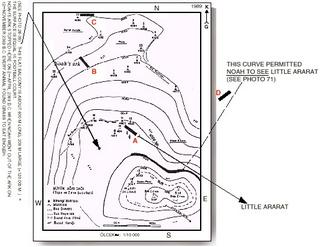 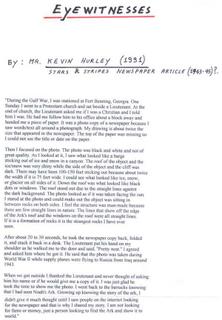 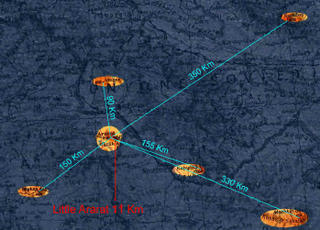 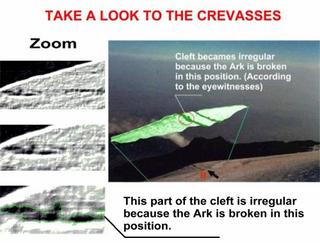 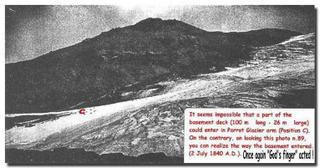 To get access to the entire book on the "ooparts" site, click the
"Cave Men" link above. HIGHLY RECOMMENDED READING.


For an excellent summary of ark history and claims, click here and read the five chapters of the Segraves book accessible by clicking the "next" button at the bottom of each chapter.

It seems I must have rattled somebody's chain. Most of the pictures and two thirds of the text disappeared from this post. Guess I should have kept a back-up. So much for free speech on Blogger. All we lack is some barbed wire and machine guns.


Note: Blogger doesn't seem to allow me to upload all the pics, but you can find them on Pelago's mirror site HERE

- Beroso, priest, astronomer and Babylonian historian who in 275 B.C. wrote on the habit of pilgrims climbing Ararat to scrape away the pitch on the walls of the Ark to make amulets, describes the Ark visible on Mount Ararat.

- Flavius Josephus, Jewish historian of the first century, wrote in his book: "The story of the Jews" the same Beroso's statement.

- Epifanio of Salamina in the 4 century A.D. used the real existence of Noah's Ark on Mount Ararat as a piece of evidence in defense of the Christian faith, writing: "Do you really believe that we are not able to prove our faith even though up until our times the remains of Noah's Ark are visible in the country of the Kurds?".

- Marco Polo, the famous Venetian traveller, passing near Mount Ararat in 1269 wrote in his book, "Il Milione" : "......and you should know that in that far - off land of Armenia Noah's Ark still lies there on top of a high mountain with snows so persistent that nobody is able to climb it.

Using intricate calculations based on the story in the Bible's Book of Genesis, the Italian explorer (Angelo Palego) says the ark has been preserved in ice for over 4,000 years.Laying out a series of grainy photos on his kitchen table back home in northern Italy, the 63-year-old former chemist points out the form of the huge boat estimated to be 512 feet long, 82 feet wide and 50 feet high with enough space to fit 800 train cars.
"A small piece of wood found in the same area by a French explorer friend and authenticated as dating from the time of the flood is physical evidence of his find, he says. Palego isn't the first to claim to have found Noah's Ark.
In terms of hard evidence, a group of geologists exploring Mount Ararat found rocks with holes in them resembling "drogue stones'' which were dragged behind ancient ships for stability.
Thirteen of these large stones were found in a line behind where the ark came to rest.
Palego says he just needs to get to his site to collect more evidence. So far, he has only seen it from a distance during his 13 expeditions to the mountain. The explorer has yet to get authorization from Turkey to take a helicopter, which an Italian television station has agreed to pay for, into the highly sensitive military area where he was once taken hostage by Kurds.
"We've asked the Turkish government to let us go in and I won't give up until I get there,'' said Palego. "This is my mission.''
Palego has a number of pictures on his site which are computer enhanced--a photo of the ark is inserted to make the location of the ark clearer. One thing of interest on his website is that wood purportedly from the ark was tested by a science lab which concluded that it was nearly 4,500 years old and petrified.
His 11 expeditions to Ararat confirmed with mathematical precision what the author had already discovered in the Bible.
It's really difficult to find the right adjectives to describe how this work kindles astonishment in careful readers.
With the publication of this work the whole world is placed in front of a disturbing reality: the Universal Flood with the waters above the tops of the highest mountains.
The breath-taking account of the expeditions carried out by the author on the Ararat demonstrates how faith can inspire courage.The first and third expeditions were carried out completely alone; the fourth with Reinhold Messner. Taken prisoner by the Kurds, attacked by a bear; in the midst of vipers, scorpions, lightning, bandits, terrorists, falling rocks, dangerous wild dogs, storms; cold, heat, thirst, victories and defeats... finally, triumph! All this has been described in his personal diary where the images and sensations are still fresh and throbbing, showing how faith and courage can make man climb towards the highest summits of beauty, purity, and poetry." 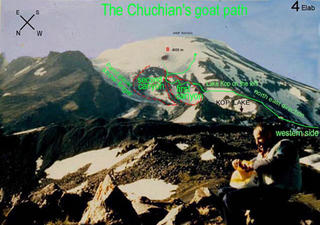 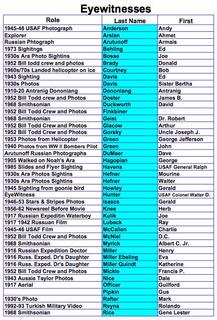 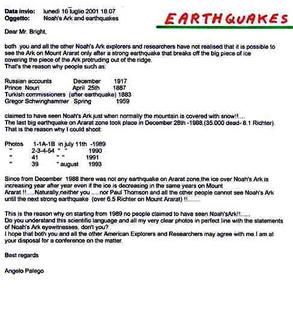 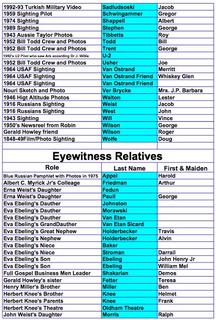 Photos are obviously retouched fakes. You are a total nutcase for posting such crap.

Yeah, right. And I suppose Marco Polo used retouched photographs? And what about the guy who wrote the book in 1711? You are obviously in denial. The pictures and sketches all agree with each other, and many were drawn or taken before digital technology existed. I suppose they're all fakes? Thousands of people schemed and colluded together over thousands of years and somehow (!) their testimony is consistent, although they never communicated with each other. Your tin foil hat is restricting the blood and oxygen supply to your brain.

What happened to all those great pictures of a fully intact Ark sticking out of a snowbank? Did you decide they were perhaps a little too good to be true? What gives?

I found two photos that were identical except that in one there was an "artist's enhancement" of what the ark would look like without the covering of ice and snow. The outline could be seen through the ice and snow, but I deleted the "questionable" one on the grounds that it might be construed as a deliberate attempt to mislead the viewer. I couldn't determine whether several others had been "doctored", so I deleted them. I should have examined them more closely before posting them. Sorry.
If you look carefully, you can see that the dimensions and orientation match the information recorded in the Bible, except for the movement that occurred in 1840. I have a great hi-rez video of the keel sticking out of the glacier. I'm not sure if it is located at the lowest elevation where the base deck rests, or higher up the mountain. Also some stills of the crevasses (parallel to the glacial movement... very unusual for crevasses) along the outline of what appears to be the ark buried in ice and snow.
So the short answer is "yes" I did think some photos were "too good to be true" & didn't want to strain my credibility any more than it already is.

- Beroso, priest, astronomer and Babylonian historian who in 275 B.C. wrote on the habit of pilgrims climbing Ararat to scrape away the pitch on the walls of the Ark to make amulets, describes the Ark visible on Mount Ararat.

- Flavius Josephus, Jewish historian of the first century, wrote in his book: "The story of the Jews" the same Beroso's statement.

- Epifanio of Salamina in the 4 century A.D. used the real existence of Noah's Ark on Mount Ararat as a piece of evidence in defense of the Christian faith, writing: "Do you really believe that we are not able to prove our faith even though up until our times the remains of Noah's Ark are visible in the country of the Kurds?".

- Marco Polo, the famous Venetian traveller, passing near Mount Ararat in 1269 wrote in his book, "Il Milione" : "......and you should know that in that far - off land of Armenia Noah's Ark still lies there on top of a high mountain with snows so persistent that nobody is able to climb it.

Even you had to admit to yourself that an intact Ark after thousands of years would be an impossibility. It would seem incredible to me if there was even a trace of shards remaining. I think you helped your cause by taking down those pictures. Do you get the feeling that I'm the only one that visits your site? If a site gets no visitors is it akin to a tree falling in the forrest?

It's not an impossibility. Pieces of it have been brought down. Tests show the wood to be about 4500 years old. The wood is an extremely rot-resistant species, and coated with pitch. Furthermore, it has been frozen for most of that time. If a mastodon can be preserved (by petrification or whatever means), certainly white oak or even cypress can be. (The 4500 year-old tested sample was said to be petrified.)It obviously isn't "intact" as there are known to be at least three major portions at different locations (one in the Parrot Glacier and one in the Ahora Gorge) since the volcanic eruption in 1840. The upper stories are still apparently mostly intact, except for a break on one side(according to eyewitness accounts). The outline can be seen by the crevasses that form as the snow pack moves over it. The original resting place was protected from the fierce wind and waves by the orientation of the Caucasus Range. God's providence placed it there, and I think God has His reasons for preserving it.
I've wondered how much traffic I get, but I don't know how I could count unique separate individuals. Numbers aren't really important anyway... pointing even one wayward soul in the right direction would make it all worthwhile. I haven't looked around for counters, although I did see one for Windows. I can run Windows, but I definitely prefer Tiger. Any suggestions?

Sure is WET around here... about 18 inches of rain in the past week... and it isn't over yet. That's almost half of what we normally get in a year, I think.

Better get your Ark built soon. A liitle humor there.

Speaking of rock drilling... (weren't we? See "Junk Science" post.) Just wondering if Curtis happened to peruse the information available on page 3 of the Ooparts link. It seems the builders of the Great Pyramid were drilling rock at a rate 500 times faster than our best modern diamond rock drills. Check it out. The columns cut out of solid rock were spiral cut at a feed rate of .1 inch per revolution. Unthinkable! The info is just below the picture of the subterranean Hypogeum.